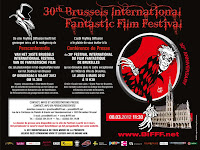 The Incident (2011) – Alexandre Courtes (France/Belgium)
Friends are working together in a psychiatric hospital, but when a storm rises the patients get their say.
The Incident, directed by Alexandre Courtes (responsible for videoclips of The White Stripes, U2 and Jamiroquai), takes the prison riot movie to a whole new and intensly scary level. Its première caused quite a fuss when two members of the audience fainted during its screening at the Torronto International Film Festival and had to be escorted out by medics. It’s an esthetically impeccable horror shocker, edited by Baxter (The Hills have Eyes, Piranha, High Tension) and a Belgian co-production. If you want to know what it feels like to be locked in with a bunch of dangerous psychopaths in an asylum without a way out and in the middle of a violent thunder storm to top it off, then The Incident might be your mentally deranged cup of tea !

Carré Blanc (2011) – Jean-Baptiste Leonetti (France/Belgium)
Philippe plays a game to achieve more power in a world where everything is determined by the caste system. Philippe’s wife however wants him to return to reality.
The French-Belgian co-production Carré Blanc is one of the most impressive views of a dystopian future we’ve seen in years This brilliant first feature by Jean-Baptiste Leonetti, with influences by Orwell, Huxley, Kafka and Tarkovsky, takes us to a hard and soulless society that is dominated by gigantic, anonymous corporations. Leonetti wraps up his nightmarish vision in astonishingly beautiful back and white cinematography, seamless editing and superb performances by Sami Bouajila (Days of Glory, Omar Killed Me) and Julie Gayet (Sélect Hotel, My Best Friend) as the doomed couple Philippe and Marie. 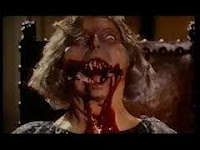 Rabid Grannies (1988) – Emmanuel Kervyn (Belgium/France/The Netherlands)
When the grannies receive an evil gift from their devil-worshipping nephew, the happy family gathering is about to change.
Two elderly sisters invite their wonderful nieces and nephews to a dinner party in celebration of the sisters' upcoming birthdays. The one nephew who is not invited is the ostracized black sheep of the family whose devil-worshipping activities have resulted in his being removed from the sisters' inheritance. The rest of the guests are merely putting in time; they're really just waiting for their aunts to kick the bucket, leaving them amply endowed via their respective inheritances. But, the nephew sends a party gift that turns the scene into a frolic of the macabre: the aunts turn cannibal and eat up all their guests! This film's definitely not for the squeamish. 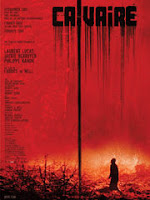 Calvaire (2004)– Fabrice Du Weltz (Belgium/France/Luxembourg)
A traveling entertainer falls prey to a disturbed recluse in director Fabrice Du Welz's twisted, slow-burn riff on Deliverance and The Texas Chainsaw Massacre. Having finished his latest performance at a remote retirement home, wandering singer Marc Stevens (Laurent Lucas) packs his gear into his van and sets out towards his next gig. Unfortunately for Marc, the fog-shrouded roads of rural France are more treacherous than he ever anticipated. When his van breaks down in the middle of the night and a skittish local promises to lead him to a nearby inn owned by the eccentric recluse Paul Bartel (Jackie Berroyer), it appears that luck may be on Marc's side and he will be back on the road with the light of the morning sun. This isn't your average bed and breakfast, though, and Bartel certainly isn't the kindly innkeeper he initially appears to be. When Marc's van is set aflame and his increasingly menacing host makes a most disturbing claim, the soft-spoken singer will be forced to fight for his life against not only Bartel, but an entire village of deeply disturbed woodsmen.

Taxandria (1994) – Raoul Servais (Belgium/Germany/France)
This European produced animation/live-action fairy tale will appeal to both children and adults. The frequently surrealistic work took 15 years to make and cost $15 million. It is the tale of young Prince Jan, who has been sent to a quiet coastal resort to study for his final exams, but instead Jan spends most his time with his new friend the lighthouse keeper. Jan ignores the warnings of the locals who claim that the loony lighthouse man eats sea gulls for breakfast. Maybe he is crazy, but this does not prevent the prince from entering the keeper's dream-land Taxandria, a phantasmagorical place devoid of time, memory, and progress. The land is ruled by a two-headed prince and his policemen who insure that everyone there lives in the Present (it is illegal to discuss the past or future). While at first, Taxandria seems a magical, wonderful place, Jan soon sees the darker sides of this strange world. The people are not happy living only in the present; it is repressive. Soon he sees that many suffer from extreme paranoia. One young man, Aime, seems to be a catalyst for change in Taxandria as he is obsessed with learning about the country's past. Later Jan falls in love with Ailee who is trying to free herself from the paradisiacal confines of the Garden of Mirth, where women are kept away from men
Gepost door walter a.p. soethoudt op maandag, maart 26, 2012 2 opmerkingen: 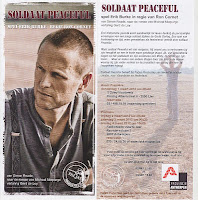